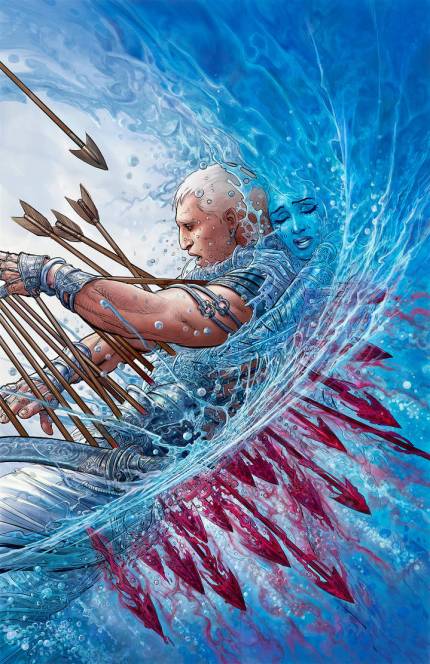 For thirty years, Antigonis’ first love had been the sea. Born on the port islands of Kal’minas, the boy’s first steps had been along those shores. His first time aboard a seafaring vessel had been when he was only a year old. He helped his father pull in nets when he was only four, and by the time he was seven, he was sailing alone.

Antigonis went to the sea first when he had problems. When he was mad at his parents, he told her everything. When his heart was broken, she listened. When his soul ached to explore, she agreed. When he got a taste for war, she stormed. What Antigonis never knew was that she loved him in return.

If waves crashed against the shore, they would crash more gently when he was present. If passage were necessary, he would never weather a dangerous storm. If he was hungry, fish would always find their way into his nets. He was considered a good luck charm, for as long as was in the sea, he was safe.

War came to Kal’minas, and soldiers told stories of the sea fighting alongside Antigonis, whose blade carried the fury of the current. It wasn’t until war left Kal’minas that things changed. She couldn’t protect her Antigonis when he strayed to land. As soon as her gentle caresses stopped lapping at his feet, he was unprotected. He was as vulnerable as a toddler.

Antigonis led the charge against the people of Vol’dyr, running headlong against the horde. He leaped from the boat and splashed in the shallow waves. No sooner did the waves recede, did Antigonis feel the bite of the first arrow. One, he shook off and roared. Two, he winced at the pain. Three, left him winded. Four, he was reeling. Five, he staggered back. Six, he stumbled. The sharp points of the arrows sunk and found their way home, one right after another.

A giant waved swelled behind the invasion force and behind Antigonis, and as he fell, the wave cradled him. As the warm coastal waters of Vol’dyr swelled around him, he felt a calming embrace like that of a woman’s touch. “Shh,” she said. “I’m sorry.” And he slipped beneath the surf.